I cordially invite you to read the interview with me about my painting, which I gave in Day&Night magazine in issue number 110. 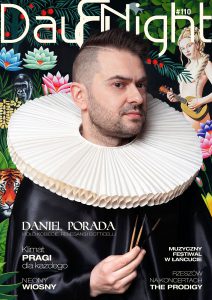 Homage to a Woman, Renaissance and Botticelli

Why A Woman in your Work?

Well, I could say: ’Why not?’ but the answer is a lot more complex. I think of women as human beings who are a lot closer to perfection than men are. And on many levels of human activity. There is only one area, where a man predominates over a woman.It’s a physical force. But I’m not interested in that.I’m a supporter of solving problems with the use of wisdom and gentleness, which are the main attributes of the female members of the human race. Shortly speaking, i find that women possess a lot more of these features than men. Their existence gives the world a lot more positive and life-giving energy. I’m horrified to see how much wrong in this world is caused by man’s ambition and its wounded pride.The kind of world that men have been treating us to so far, doesn’t interest me. I love female gentleness. To summarise,I can add that a female body is God’s greatest masterpiece. That is why I choose a woman – because I want to show the beauty of our world and infect others with it. My work is my private homage to a Woman.

Very often in Your paintings i can see recurring animal motives.Why?Where did it come from?

Animals carry a symbolic meaning in my work. They are part of the female world that surrounds her. She is in its epicentre, she influences it. Painting men doesn’t interest me at the moment. In the symbolic interpretation of my paintings, animals contain the whole living universe, in which a woman is present. So in my paintings we can come across different creatures, the gentle ones and the more dangerous one. Butt-what is really important-all of them can be tamed by a woman, who can turn a tiger or a lion into a friendly cat. Although it’s not always like that, but sometimes, i don’t attribute a symbolic meaning to an animal, i feel subconsciously that a particular animal has to be in a certain place in my painting so i go ahead and paint it.

What fascinates You in the medieval era, and especially in the Renaissance?The feel of it?Or maybe something deeper?

The aesthetics of the late Middle Ages or even the Renaissance had a big influence on my style of painting. It sounds like a paradox, but from the Middle ages all the way to the 20th Century, i can’t see any more modern style of painting than late medieval. Its simplicity, synthetism, contouring character, with predominant drawing in its form. In my opinion, as far as form is concerned, the 20th Century pop art is a lot more similar to the early renaissance painting than to the polish 20th Century Colourism, which conquered polish painting and we can see it very often in polish art galleries. For me, the Colourism is a lot more archaic than the 15th Century art. In addition, int the semantic sense, the Renaissance is a lot more similar to modernity because it exposes human body and its needs and it’s not ashamed to show it and talk about it.

What is your attitude towards nudity, a motif that is quite prominent in your paintings? Is it connected to the feminist side of your painting?

Nudity is not a tabu for me. I’m interested in a human being as a whole: her psychic, her spirituality, but also her body. A body of a naked woman is beautiful and i want to immortalise its perfect form.I don’t paint acts, paintings ,in which only a woman is present. I always try to show her in some symbolic, specific context. In addition to the fact that i show a perfect female body, i also want to bring some symbolic meaning to my paintings. I like it, when a painting makes us think, stirs our imagination, forces us to make different associations. I’m not interested in strictly formal paintings, where a painter uses just one style all his life or plays with geometrical forms. Abstract painting is not my cup of tea.

Is it tactful on my part to ask you a question about who you drew your inspiration from for your paintings?Personally, I can recognise influences of Dürer and Rafael Santi…Have i missed somebody?

You didn’t mention a man who i’ve always loved and who influenced my style most.It’s of course Sandro Botticelli. He lived in the second half of the 15th century, but his paintings, in their form, are extremely modern. In his days it was probably a result of not being able to copy nature accurately, but the final outcome is that when we look at his paintings, he amazes us with his contemporary understanding of connecting shapes, colours, smudges. I consider ‘The Birth of Venus’ – and I’m not going to be very original here – one of the most beautiful masterpieces that a human ever created.

I have known you for a few years now, mainly from the graphic side: composing texts, editing them.
You have only recently started talking about your Work. Am i right? If not, why have you started publicizing your paintings just now?

I graduated from the Academy of Arts quite a while ago but i made my paintings public not so long ago. It is because i have been very busy with other very important things and i simply had no time to paint. Besides , it took me some time to develop my own style of painting. I may also add that it takes many days of painstakingly putting a paintbrush, which is an approximate size of number 0, to canvas in order to achieve the kind of form present in my paintings.

I cordially invite you to read the text about my painting in a great portal dedicated to culture.

I cordially invite you to read the excellent independent magazine JANG, where is, among others interview with me about my painting.